Namaste with Sasquatch (Monsters in the Woods)

Back by popular demand!

Author Virginia Wade has come out of retirement to write another steamy Bigfoot series.

Namaste with Sasquatch (Monsters in the Woods)

On a weeklong outing, twenty-two-year-old Kia Forrester and a group of friends travel to the Rocky Mountains to attend a yoga retreat. Unbeknownst to them, a lab created Sasquatch has just escaped captivity, tasting freedom for the first time. He’s hiding in the woods … watching … waiting … for the right moment to take what he wants.

Namaste with Sasquatch 2 (Monsters in the Woods)

With the search party continuing to scour the forest, Kia Forrester harbors a secret. She knows what they are looking for … having encountered the creature in question—a seven-foot tall Sasquatch named Teddy. No one will believe her, though, until she brings her friend, Jen, along. Some secrets are just too good not to share.

Namaste with Sasquatch 3 (Monsters in the Woods)

Escaping the clutches of his maker, Teddy remains defiant, hiding in the forest and following Kia around—mating with her and Jen whenever he’s able. Roland Shepherd devises a scheme to capture the Sasquatch, using Kia as bait, but his plan fails spectacularly.

Namaste with Sasquatch 4 (Monsters in the Woods) 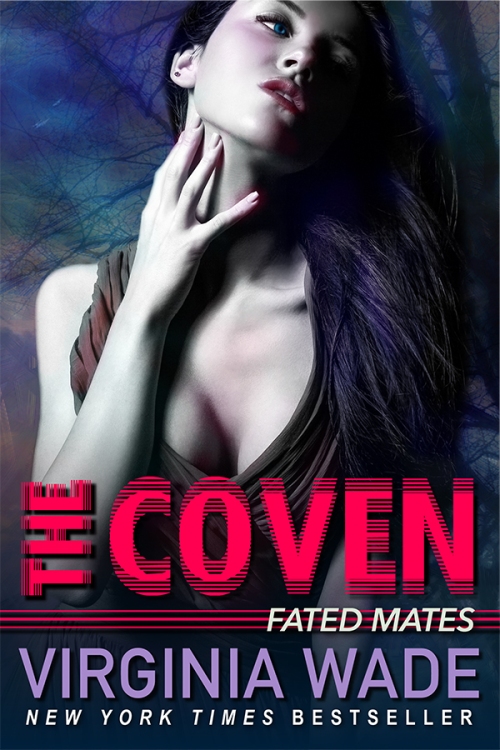 A reluctant witch… in love with a beast…

Having returned to his human form, Finn Taylor doesn’t remember what happened in the woods … but his connection to Mercedes is stronger than ever. He’s inexplicably drawn to the young woman, although she’s strictly off-limits. Forces are at play that will require Mercedes to use her powers to save herself and her friends, yet it’s her heart that is in danger of being broken. 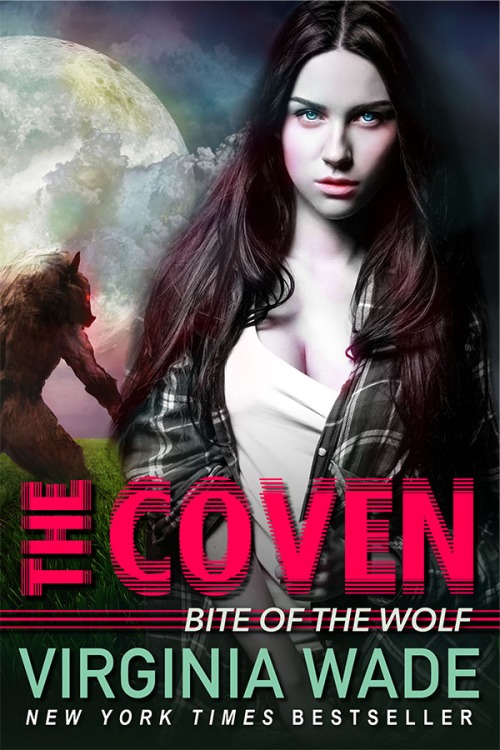 New release! An innocent beauty… a man trapped in a spell… and the curse that separates them.

In a bid to break the curse, Mercedes Spencer and her friends enlist the help of vampires, who have taken up residence at the Rhapsody Estate, but can these bloodsuckers be trusted? The beast in the woods offers up a tantalizing distraction, Mercedes learning his identity, which makes their secret relationship even more shocking.

You can find The Coven: Bite of the Wolf at these vendors:

New Release! The Coven: Cursed by the Witch

I’m back with a hot new trilogy, featuring a reluctant witch and her beastly lover. If you loved Bigfoot… yeah, you might like this.

A steamy tale of supernatural lust…

Having fallen under a vengeful witch’s spell, Finn Taylor is doomed to walk the woods half-man, half-werewolf, not being able to fight his baser instincts. Eighteen-year-old Mercedes Spencer encounters the beast in the forest, as he ravishes her in the moonlight. One taste of the forbidden won’t be enough, though. The unlikely lovers are drawn together, although a curse will separate them forever, unless it can be broken.

You can find The Coven: Cursed by the Witch at these vendors:

“Feeling the Heat: An Anthology of 8 Steamy Stories”

These stories are of the taboo nature of relationships, dark, hidden, fantasies, and temptation.

I wrote a new story for this anthology titled, “His Hidden Room”. Claudia arrives home for Thanksgiving and discovers her stepfather has built a secret sex chamber in the basement. Her mother’s death has been difficult to process, and although they are still reeling from the loss, Claudia and Jack find themselves growing closer. An attraction that neither ever dared to acknowledge blossoms…and it’s only a matter of time before they give into temptation.

Interview with the Sasquatch 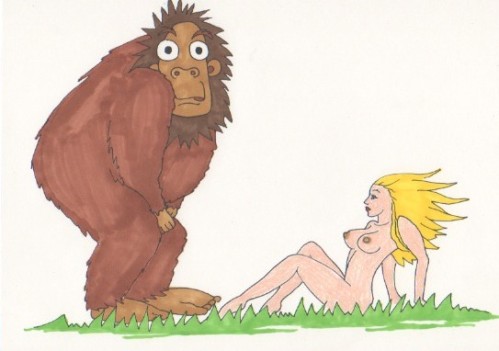 Hello, Leonard. Thank you for sitting down with us.

You’ve lived in the Pacific Northwest your entire life; do you remember your father at all?

How did he die?

Light from sky killed him.

Do you remember how old you were when this happened?

You’re a father now yourself. How many children do you have?

There are only supposed to be male Bigfoots, yet you had a girl. Is that rare?

Is that a yes?

The mother of your children is Porsche Delessops. Is it true that you kidnapped her?

How did you meet?

I smelled her. Followed scent.

Then you kidnapped her?

All right, so after you “met”, she became a part of your tribe?

I’ll take that as a yes. How do you feel about the fact that she’s married to Mike Tancardie?

You don’t mind sharing Porsche with him?

You’ve spent some time with her younger sister, Lena. Is she still with the tribe?

You’ve spent some…alone time with Lena in a cave. Was Porsche jealous of this when she found out?

Um…okay. Your leader, Bubba, died a few years ago. Now that you’re the head of the tribe, what are your hopes for the future?

What direction are you taking the tribe in? What are your goals?

Goodness. Laughs. Okay, now that the Bigfoot hunters are gone, what is the biggest challenge for the tribe?

Will Porsche stay with you or is she going to leave?

Would you let her go, if she decides one day that she doesn’t want to stay?

There’s a new member of the tribe named Brutus. Some say that Porsche is quite fond of him. Are you worried that he might steal her away from you?

Looks like that might be a sore subject. Are you at all worried about these genetically modified apes? Are they dangerous?

Besides chocolate and…um…pussy, what other things do you enjoy?

sighs Do you worry your tribe will be hunted by the outside world, especially now that people know Sasquatches really exist?

Well, thank you, Leonard for talking with us.

It’s been a pleasure talking to you, but…I gotta get outta here right now!

I wrote a new story, Heather Undercover, for this anthology, which is about an industrial spy getting caught stealing corporate secrets, and then facing the consequences of her actions.

In Monster, Fantasy Hits of The Year, seven of today’s most popular erotica writers offer up previously published, steamy tales of paranormal encounters with scary, yet naughty creatures bent on seduction.

On a side note, the recent media attention given to the Moan for Bigfoot series has been surreal and exciting. It’s been fun doing interviews and radio shows to answer everyone’s foremost burning question: does the well-endowed hairy one really exist? Um…my answer would be—only in my dirty mind.

I also want to thank all my awesome Twitter peeps, who tirelessly tweet and retweet on my behalf. And thank you EWS forum peeps, for joining me on this crazy journey, as you know in detail of all my shenanigans, triumphs, and disasters. We are bonded through thick and thin.

Will what happens in Vegas, stay in Vegas? 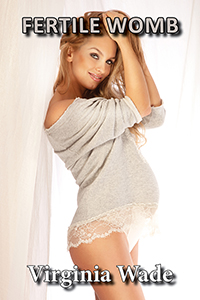 Lucy will do anything to have a baby…

After the latest round of infertility treatments have failed, Lucy’s doctor suggests another form of therapy, which shocks the lovely blonde. He’s established a private clinic for only a few select patients, who will have their pick of donors. The only catch is: they must be willing to engage in intercourse the old-fashioned way with the doctor watching!

Olivia Manson plans to confront her husband and his lover at a key party held at a lovely estate. What she did not expect to find was their congenial host, Cole Custer, dead on the floor of the library. While being questioned, Olivia and Detective Brandon Lock find themselves in a compromising position. As things fall apart and marriages crumble, she suspects she might have found the man of her dreams.

“Oh, my goodness.” I’d dropped the towel, but thankfully, it was dim enough that Detective Lock could not see me. I’d just barely put it in place again, when I bumped into him, his hands connecting with my shoulders. “I—oh, sorry.”

“It is.” We were surprisingly close. My senses were inundated with his aftershave, which gave off a woodsy and citrus aroma. “Wonder when they’ll come back on again?” His fingers pressed into my skin. The touch was entirely unexpected, but…it felt rather nice. “Do you think I’m a bad person for going behind my husband’s back?”

“You said he was cheating.”

“He is. She’s here too. It’s Wendy Pike. You should really grill her about it. Make her totally uncomfortable. She deserves it.”

“Don’t you think your husband might be playing a part in that as well?”

“I’m sorry you’re going through this.”

His concern was bewildering. “T-thank you.” He had yet to let go of me; his proximity was far too intimate, far too pleasing. “I usually don’t like cops. I’ve probably said all the wrong things. I’ve probably incriminated myself seven ways to Sunday.”

“You probably have.” There was a sultry quality to his baritone.

“Will you arrest me?”

For some reason, his threat didn’t alarm me. In fact, he moved even closer now, his grip was firm. I was only inches from his face, his cologne teasing me mercilessly. “Mr—detective. Um…I’m not sure what’s happening here…but—”

His lips covered mine, initiating a perplexing kiss. This wasn’t supposed to happen, was it? Was this an interrogation technique used on females only? Finding him utterly attractive and more than dangerous, I gave in, nearly falling into him, while his arms encircled my back. The towel was history in that moment, landing at my feet. I’d never kissed a stranger before, and I hadn’t planned on this. Now that it was upon me, I found myself enjoying every second of his full, moist lips, his inquisitive tongue, and the way he groaned when I moved against him.

His hands drifted down my back, cupping my buttocks, lifting me onto a hard cock, hidden behind his pants. “Oh, Jesus,” he uttered.

He picked me up, while I wrapped my legs around him, as we stumbled towards the bed. Things had escalated rapidly, taking a decidedly erotic turn. I landed beneath him; his lips were on my neck, biting and kissing, while he fumbled with his pants, undoing the belt, lowering the zipper. Because of the darkness, he was mostly in shadow, but wherever my fingers touched him, I felt heat and sinew. He was in fine shape; his muscles were firm and his stomach taut. A hand fell upon on my thigh, fingers sliding inwards, grazing my pussy. In the space of a few seconds, the encounter had transformed into a fire that now blazed out of control. His cock pressed to my sodden entrance, and, as he groaned, he slid deep, filling me to the balls.

“Oh, my…God!” I flung my head back onto the bed, surrendering completely to a stranger, who more than likely thought I was a suspect. The questioning had begun innocently enough, but this was truly shocking. “Is this really happening?” I sounded breathless.

“Yes,” he rasped, thrusting, pressing into me.

My clitoris felt huge, engorged with arousal. I wrapped my legs around him, drawing him nearer. “Mr—Brandon…ooohhh…”

“You can blame it all on me…later,” he rasped. “You’re one beautiful woman. Jesus, fuck!”

I lifted my hips to match his thrusts, reveling in the feel of him inside of me. He drove all the way to my womb, massaging every silken inch of my tunnel. I’d not wanted to have sex with any of the men at the party tonight, but this man, this masculine hunk of testosterone, he was all mine.

“None of the above.”

“Oh, thank…God.” I clung to him, locking my ankles. “Oh, yes. Fuck me!” I dug my fingernails into his buttocks, feeling hints of perspiration. He thrust almost relentlessly, my body tensing, preparing for a blistering orgasm. “Oh, yes! More! Oh, God…it’s so good!” I moaned deep in my throat, shuddering beneath him. He gave me no quarter. Thrusting vigorously, his breath was raspy in my ear.